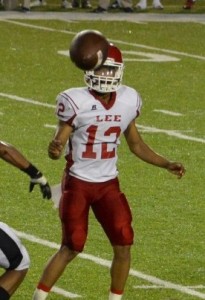 There was never a question prior to the season that Lee’s receiving group was loaded and deep.  However, there were multiple people wondering who would get the ball to the receivers.  For the third week in a row Mike Huntley, Jr. has answered that question emphatically.  In leading Lee to a 49 – 35 victory over the Prattville Lions, Huntley delivered on over 80% of his passes and more than 300 yards passing to go along with 80 plus rushing yards.

As has been the custom this year Lee scored early and often.  The Generals scored on all five of their first half possessions to take a 35 – 21 lead to the half.  After trading scores in the third quarter the Generals put an early touchdown on the board in the fourth quarter and played out the final few defensive possessions of the game with the second team defense.

Huntley once again shared the passing wealth hitting five different receivers and connecting on five touchdown passes (plus one rushing), two each to Henry Ruggs III and Marquis Johnson and one bomb to a wide open Kaniaus Johnson.  Marquis led the group with seven catches for 167 yards.  Tedarrian Murray threw in another 92 yards on the ground on only ten carries.

The defense once again had its ups and downs.  Penalties continue to burden their effort as Prattville scored on their first two possessions following fifteen yard personal foul penalties on each drive.  It isn’t a coincidence that the defenses best outing was Lee’s least penalized game versus Smiths Station.   Bright spots were delivered with another interception by Kevontae Ruggs and a fumble recovery by Antonnio Ballard.  The defensive 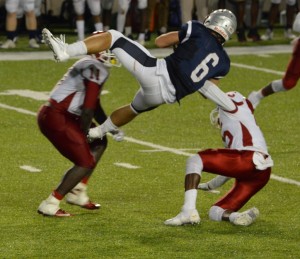 aggressiveness did result in another nine tackles for a loss including a Sam Williams sack which almost decapitated the quarterback.  With Coach Rogers and Coach Hudson quickly giving the backups a look in the fourth quarter it may have been both a wake up call for the first team and an audition for the second team players looking for opportunities to get on the field more often.  Just as last year, there is certainly confidence that once the defense combinations are worked out the Generals could be sitting in a very envious position.

As discussed with several coaches, it seems strange to complain following a rather convincing victory but the upside of this version of the Lee Generals appears to be out of sight if just a few things can be corrected.  When that happens…it could get ugly.  That’s a good thing.

Just another great day to say I’m a General.