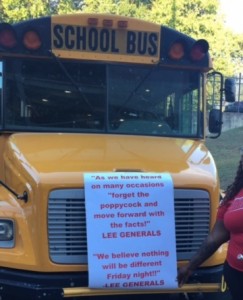 You know there is talking to just talk and then there is speaking of what was actually seen, heartfelt, and honest.  A week ago the Lee Generals deserved to lose to a team that they felt they should have dominated.  As Jeff Davis apparently knows, it was written here first that Lee lost literally every part of the football game and came out on top.  It takes very strong convictions and honesty to post such public statements.  Yes our team even thought the words were a little harsh.  What did they do?  Talk about the other teams quarterback while in his presence?  Huntley’s inaccurate, Huntley makes poor decisions, Huntley is afraid to run with the ball.  Lee’s offense will not move the ball on us and their weak defense will never stop what we have to throw at them.  No, this side of the Interstate takes a different approach. 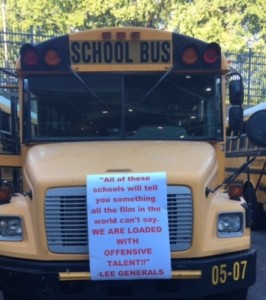 Lee took last week’s lesson and went to work…”UNFINISHED BUSINESS”…Lee 41 – JD 13. 6 and 0 (3 and 0 in the region).  The intensity and dedication started with the best coaching staff in the city and filtered throughout the team as the week progressed.  You could see it in their eyes as they moved about the school.  The student body felt it as the week progressed.  We were going to follow up a totally stinking effort with the best performance of the season.  It got to a point that anonymous classes were passing encouraging notes to the defense.  Were feelings hurt?  Maybe, the note was read over 500 times.  Results; best defensive effort of the year.  Preseason – JD state champions, quarterback with everything, all purpose athlete that will make opponents look silly, and a world class defensive player (thanks ex Montgomery Advertiser sportswriter for the brilliant evaluation of Montgomery football, hope things are working out for you in your new location). 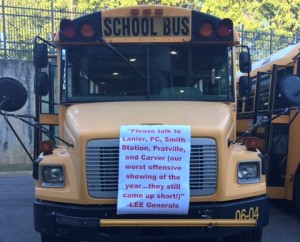 Then there were the quotes on the Jeff Davis buses.  Don’t get us wrong, we love having you follow our web site.  As stated earlier, you’re going to find the truth as we see it on this side of the Interstate.  We stink we say it, we dominate we say it.  We told you to talk with Lanier, PC, Smiths Station, Prattville, and Carver to get the scoop on what we had to offer.  Sidebar; we spelled Smiths Station and Prattville properly in the article that you were referencing.  On bus two, you were warned that WE ARE LOADED WITH OFFENSIVE TALENT.  Didn’t believe us.  Huntley and his o-line, Wright, K Johnson, M Johnson, Murray, Patterson, and this other guy um…oh yea a guy named Ruggs III.  Finally on bus three, the leader that we are fortunate to have tells us “forget the poppycock and move forward with the facts!”  “Nothing will be different on Friday night.”  We tried to tell you before you dogged OUR quarterback to his face.  Just another ridiculous night for a student-athlete that wasn’t even mentioned in the city before the season to one that is now quote “under the radar as an Alabama Mr. Football” possibility.

Now to the game.  Defense,  that is what the entire school has been looking for.  Thirteen points, please hold the remaining opponents to those kind of numbers.  Although K Johnson put the hit of the night on JD every single person that we heard were talking of the presence you brought to this game.  It has been there and now it is known.  Fans are going to expect it from here out.  Oh, and as Reggie Ware mentioned in the post game meeting, the 2’s deserve a huge shout out for a shut out over the last ten minutes.  Like you’ve heard before, you never know who is watching.  In this case one of your peers, excited that you completed what they had started. 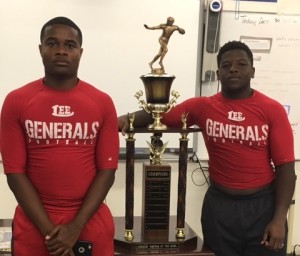 Offense, come on 41?  You screwed up your average.  Okay we will blame it on a very conservative second half game.  After six games it has been written every way you can write it.  The U.S. military may be the only offense with more weapons than what Lee presents (a quote for future opponents!).  Huntley – 16 for 22 (inaccurate?) for 270+ yards and another fist full of touchdowns.  Ruggs III and Bubba with ridiculous receiving numbers.  Running for 220+ yards and just for good measure throwing Ruggs III into the running game on occasion, or would that be just enough to be our leading rusher for the night.

Six and the city!  Another Battle of the Bowl Championship.  Playoffs staring us in the face.  IT IS just another great day to be a General!