Whatever the coaches told the defense at halftime finally hit home.  Although I have a strong feeling what the message was (trust me ninety percent of our readers would completely understand the talk but to some it might not be PC) the youngsters finally got it.  The words were those our student-athletes understand completely, not bad words, not ugly words, not hurtful words, basically just be true to yourself…be who you are.  The results were almost more three and outs in the second half than we saw all year combined.  Forced fumbles, serious hits, people flying to the ball.  We made a few mistakes but the effort, excitement, and overall results were what the coaches had been looking for all year.

One defensive player complained of a sore neck after the game, being one of our more consistent defenders all season he didn’t realize that he actually stuck some hits tonight.  No grabbing and clutching and hoping but instead sticking your head in someones chest and laying them on their back.  After seventeen halves of “defensive” football the eighteenth was the one the coaches and fans were looking for.  The Generals put up some impressive offensive numbers this year, if they had played behind our second half defense from Thursday night for the entire season there would have been nights the Lee fans would have witness 60+ points on numerous occasions.  Thank you to the young men for finding the message and thank you to the coaches for asking the same thing of the students week after week and finding the terms they understood.  Both parties could have quit on each other if it were not men teaching young men.  If you want to keep it real, their terms, the offensive players and coaches are due a huge hand for sticking with their brothers throughout times that were difficult when you couldn’t get back on the field.

OOOOOOkay, as Paul Harvey used to say, “and now the rest of the story”.  (Yes, I am old!)  Welcome to the wire grass or whatever they call the area.  You have to give them credit.  Beautiful, fantastic, excited fans.  One or two a little over zealous, but hey the same better be said of some of us.  A band that other than sitting in Auburn (University) or Tuscaloosa can not be beat.  We have fun and enjoy or band but you put on a show.  Sorry Smiths Station, Phenix City, Auburn, and Rattville, you take a back seat.  Crazy, nice campus and we are extremely sorry for the price that was paid for the facilities.  All students should have the luxury of the facilities your are afforded but never at the price you paid.  Our student-athletes look forward to competing against the Wildcats in every competition between the two.  It was the Enterprise softball team that was so kind to remember our Rod Scott and student body with the signs of remembrance when we visited just as we remember the students lost to mother nature in your time of loss.  You are mentioned in my classroom every year when reviewing emergency situations.

After being put into a region and area with you several years ago we learned quickly that venturing into your area posed a special problem.  Not only did you expect to win but officiating crews also expected the same.  Lee ran 60 plays Thursday night and 15 penalties were called.  I am not a mathematician but do teach next the the best math teacher in central Alabama.  I believe that 15 of 60 is 25%.  One of every four plays the Generals ran were completed with an illegal action. On the other hand the Enterprise Wildcats committed their first infraction at halftime.  The band performance went to long, five yard delay of game penalty.  (Again, in my opinion it was worth the five yards to here your music…we should have declined the flag!  Sorry.)  We had a defense back with perfect defensive position dive for the interception with BOTH hands and was called for pass interference.  Must have caught the receiver with his tail end.  We had a receiver all but unclothed trying for a reception by three Wildcat defensive backs, routine play.  We had a second string quarterback and receiver both laid out with extremely late hits on the same play, no calls.  There was a measurement for a first down on the Wildcat offensive side.  Short by the length of a football, when the ball was placed at the hash mark for play, Enterprise screwed up.  They should have asked for a re-measurement, the ball was moved forward enough on the spot to give them the first down, no need to run a play.  There was a three minute prayer session and extra officials called in to try and find a reason not to call a defensive holding call on the Wildcats.  After realizing that not one official could create a reason not to call the defensive holding on our receiver that you will see again in basketball season the stripes made the correct call and caught your jeers for actually calling the right call.  Both of our bus drivers were penalized for parking to far from the curb upon arriving at the school.  Unfortunately we are prepared for this upon our visits.  The coaches know it, players know it, and fans know it although the latter doesn’t always accept it as well as the coaches and students.

I was quickly notified by some (okay one, others were asking where number six was going to college before the game ever started…they were wearing Crimson Tide attire!) Enterprise faithful that we were facing defensive players that will be playing on Saturday.  Congratulations!  They faced a third string quarterback and a team missing the best athlete in Alabama (strictly my opinion), a receiver, our third string quarterback who hasn’t thrown a pass since midget or peewee football and gave up over 400 yards of offense.  As explained to your very excited fan, I hope your recruited defensive players don’t have to face our offensive player on “Saturday”.  He accounted for over 300 yards of offense and played a position that for the most part he has never played in his life.  We are not an offense that has no options.

Finally, Lee Nation, Lee High School, Lee alumni, Lee Legion, Lee whatever, if you have not seen Henry Ruggs III play this season you have missed an absolute freaky, scary, shocking event.  You have missed one of few people who have rendered five to ten thousand people speechless.  I have been fortunate enough to watch some of the best of professional, college, and high school athletes in the country in their sport.  Henry Ruggs III may be the best of any that I’ve seen.  Thinking that he was just a basketball player was a mistake on both my and his parts.  While throwing down dunks on seven foot players can prove to be spine chilling, the basketball court actually restricts his athletic abilities.  A student-athlete (that is not a complementary comment,  his classroom abilities are matched by his on-field accomplishments…scary combination) who 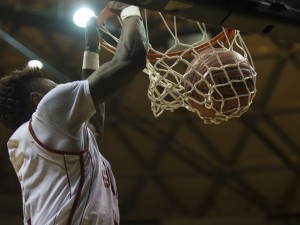 only found out fifteen months ago that running a 4.2 forty with an unlimited vertical jump and vision of seeing things before they happen works really well on a football field sort of excites colleges.  About thirty or so to be honest.  According to the Raycom television crew, if a university doesn’t know about this “kid”, they must be crazy or hiding under a rock.  Thank you Henry for two of the most exciting years at Lee High School.

31 – 26 minus a starting quarterback, second string quarterback and all-everything receiver.  As those who know me that isn’t good enough.  The score is as it reads.  The Generals fall to 6 and 3.  The positive taken away from the night were enough to make our next opponent wonder, exactly what can this team do?  Win, lose, or draw (won’t happen) it will be exciting.  Young men, we are proud of you.

EVERY day is a great day to be a General.