Alright folks, the leegeneralsathletics.com website has received it’s first scoop in a year of covering our athletic programs.  As everyone knows we have had the privilege of watching one of the most exciting athletes in the country every week on the football field.  After sitting out two years of football Henry Ruggs III decided to give the old sport a try his junior year.  Try is an extremely huge understatement.

After just a few games Ruggs III began receiving offers from a couple of schools but by midway through his junior season there was virtually no college from the south and very few from the country who had not hit Henry up with an offer.  Very seldom does somebody come out of the blue with 4.2 speed, hands of glue, a bazillion inch vertical jump, and field vision of Superman.  His junior year Ruggs III, utilized as a receiver and kickoff returner, averaged over 20 yards a reception and turned every kickoff into a breathtaking spectacle.  By the end of the season people had to be wondering why teams even tempted fate by kicking to him (ask Prattville).  His senior year only highlighted more of his talents.

The first half of the season Ruggs III was often used as a decoy which allowed quarterback Mike Huntley to continually fine wide open receivers all over the field.  One of the more memorable setups were three straight receiver screens to Ruggs III for six to eight yards apiece.  On the fourth play a pump fake on the exact same screen play found the lead blocking receiver forty yards downfield while the defensive backs rushed to contain Henry once more.  To show the type person we are talking about, Ruggs III was as excited to watch other receivers thrive off of his ability as any fan.  To even show the more unselfish side of Henry came when Huntley was lost for the remainder of the season with a broken collarbone and the offensive somewhat sputtered under the backup quarterback.

If you want to find out what others thought of Henry go to the NFHS Network website and search the Lee Generals.  Watch and listen to the announcers of the Enterprise game when Henry took over at quarterback in the second half.  After two possessions they were somewhat making fun of the Generals offensive scheme.  I believe “backyard football” may have been mentioned.  After that point the announcers were begging for the clock to run quicker.  Ruggs III accumulated 180 yards rushing with two touchdowns and threw for another 140 yards with two touchdowns as the Generals put a scare in the Wildcats only to fall short 31 – 26.  The Raycom announcers mentions that Ruggs III had something like 31 offers and after tonight he’ll have another 10.  Henry Ruggs III is an absolute unbelievable athlete in any sport he chooses.

Now for the part you have been waiting for, the Ruggs III big decision.  Following his final game as a General, Henry weighed his options.  He had already narrowed the choices down to Alabama, Auburn, Florida, Florida State, and Penn State.  While all five are still a viable option…Henry chose to take one day off before beginning basketball practice for the upcoming season.  Ruggs III was quoted, “it was one of my tougher choices as Coach Johnson told me to take all time I wanted.” 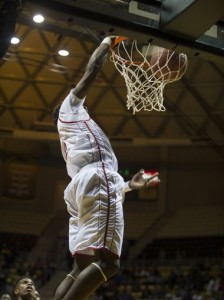