The Lee Generals split a pair of basketball games with the Brew Tech Rams on Tuesday with the boys moving to 2 and 0 with a 99 – 81 victory and the Lady Generals dropping a 65 – 61 game and falling to 3 and 3 on the season.

For those old enough to remember Nolan Richardson coaching at Arkansas and referring to his style as “forty minutes of hell”, well Coach Johnson has his own version but it only lasts 32 minutes.  The Generals literally jumped on the Rams from the start and never looked back.  Pressing and trapping from end to end led to lay up after lay up.  Brian McLean led the five Generals in double figures with 19 points followed by Henry Ruggs III with 17, Jon’datric Butler with 15, Lakeldrick Gardner with 10, and Demond Robinson with 10.  Quinterrius Rivers added 9 points to go along with 9 rebounds, Robinson had eight boards, and Marquis “Bubba” Johnson also added seven rebounds.  As was mentioned in an 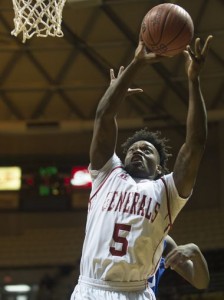 earlier article you do not want to miss a game.  Henry “Sky High” Ruggs III threw down five impressive dunks along with a few others from the Generals just for good measure.  Coach Johnson can utilize his entire team and see very little let down from one through fifteen.  It’s gonna be fun!

The Lady Generals on the other hand limped into the game versus Brew Tech with only eight players.  Four players (three potential starters) watched the game from behind the bench.  As a result the Lady Generals had one ninth grade post player, Nyana Reese, on the active roster and she actually did a great job after being thrown into the fire.  As has been the case with the Lady Generals thus far, they dig themselves a hole and either edge their way out or fall just short.

Zipporah Broughton poured in 30 points and just missed a three at the end that would have put the Lady Generals up one with 2 seconds to play.  Deasia Marsh added 12 rebounds and Naya Crawford scored 12.  When the Lady Generals ALL get on the same page the pieces are there to match the boys in excitement.  Lets hope it comes together sooner rather than later.