Keeping up with our own Henry Ruggs III has proven to be very difficult over the past month.  One week he is throwing down monster dunks on the basketball court and the next he is returning opening kickoffs for touchdowns in the Alabama / Mississippi All-star game.  Or in some instances doing both the same day. 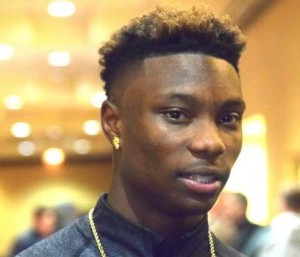 Saturday, after spending a week in San Antonio, Texas, Ruggs III will be representing the East squad in the U.S. Army All-American Game.  The game will be televised live on NBC at noon central time.  By all social media accounts Henry has proven that what he shows on a state level has not been slowed against national talent.  Although Ruggs III maintains that there are five teams in the running for his talents on a collegiate level, many rumors out of Texas indicate that the list may be down to two, possibly three.  Each college’s sports pages and papers have their own take on their shot at him attending their school.

One national assessment went as follows –

“Ruggs gets up field quickly after the catch. He displays great body control making adjustments on balls in the air. Ruggs is a fun player to watch because he always wants the ball and he is a true competitor. He has the ability to shift gears and has versatility on offense and as a return man. Ruggs can play outside receiver or slot and is very quick. He makes a lot of his plays on short routes.”

On a Robert E. Lee High School level we could not be more proud to have Henry Ruggs III as a representative of OUR school, city, and state.  He remains the same humble excelling student whether sitting in a desk smiling, making a DB look absolutely foolish while making his way up field, or with all due respect to local schools…completely posterizing an opponent on a coast to coast dunk (for the twenty-something time this year).

Henry, we all wish you nothing but the best tomorrow and look forward to having you back on campus soon.

Just another GREAT day to be on Ann Street.