The final basketball polls of the 2016 – 2017 season have come out and the 26 and 2 Robert E. Lee Generals sit in the number one position.  The Lady Generals, despite their up and down season continue to collect respect of the voters across the state and finished at number ten.

The Generals have faced opponents all year and could have used any excuse for let downs.  The two losses were to teams that they had already handled, one team twice and the other minus two starters who were on football recruiting trips and a third who was tossed for smiling at an opponent who was mouthing off at him.  In usual Coach Johnson fashion, he accepted no excuses and put the losses on himself and the team.  He understands and the team will shortly learn that although it is a nice talking point to finish atop the polls it means nothing when the playoffs start next week.  Being in the last game in Birmingham and walking off with a victory is the only way to claim the top spot in the state. 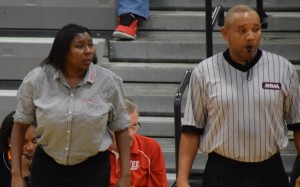 The Lady Generals on the other hand have been riding the ultimate roller coaster.  Losing or struggling with teams they should take care of and beating or pushing top ranked opponents to the brink, including taking a lead into the fourth quarter against number one ranked Sparkman.  Coach Smith and the Lady Generals seem to have turned a corner after a loss several weeks ago that seemed to be a wake up call.  They avenged the loss with a 40 point win in the rematch and for the most part haven’t looked back.  The exciting part for the Lady Generals are they are a very young team and their growth and experience have just started blooming in the past several weeks.  They too understand that starting next week it is a new season and with the proper approach can see a road to Birmingham in their future.

Before the Lady Generals and Generals host the first round of the playoffs starting next Monday, Carver comes to visit Ann Street Friday night.  After suffering a three game sweep last week at their place they will certainly be prepared for the Friday night showdown.

Congratulations to both teams on their success and we look forward to it continuing throughout the playoffs.

ANOTHER great day to be a General.